I Work For a King

Sunday evenings are a little hard for me.  After a nice, relaxing weekend with my husband and family, reality sets in and I mentally and reluctantly prepare myself for the work week ahead.  I find myself wishing that I could stay at church all week instead of going to work, because of the safety and comfort I get from my church family, the sermons and bible studies.  Lately, a lot of people have retired from my place of work, and I catch myself envying them, wishing that I no longer had to work.  Once Monday comes and I get myself back into the swing of things and the daily grind, I get over this Sunday evening blues, and am back in full force, attending to my job with dedication and perseverance.  However, come Sunday, the cycle begins again.  I know I am in need of an attitude adjustment; my husband reminds me of this every Sunday when I start complaining.  Why do I dig in my heels on Sunday evenings and fight against it? I know we all have to work; that is what the Lord wants us to do;  and the bible says we can find great reward and satisfaction in work (Ecclesiastes 2:24). I am very grateful for my job; it is a good place to be, it is very rewarding at times, I work with good people, and it provides for all my needs. I know this regular, weekly grumbling session I do is something that the Lord wants me to work on, and it is a little bit of a struggle for me.

Like all workplaces, there is good and bad.  Right now we are very busy, and I find myself exhausted at the end of the day.  I work with the public, so that can present some challenges at times. There can be personality clashes or misunderstandings, so that doesn’t help things.  As in every office setting, there are things that are ideal, and some things that are less than ideal.  Instead of wishing that I could change them or that someone would do something about these situations, I find myself reaching out to the Lord for strength and endurance.  The scripture that gets me through the tough days is “Whatever you do, work at it with all your heart, as working for the Lord, not for human masters, since you know that you will receive an inheritance from the Lord as a reward. It is the Lord Christ you are serving.” –Colossians 3:23-24. I have this scripture taped to my computer to remind me of this when I find myself feeling overwhelmed or frustrated. When I stop and read this, the peace of Lord comes upon me to give me strength. 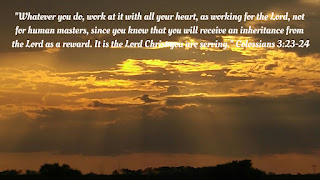 I always like to find examples in the bible of whatever particular situation I am going through.  When I am enduring stressful work situations, I like to look at the example of Daniel.  Some people might think that they have a terrible boss, but I don’t think anyone could have had a terrible of a boss as King Nebuchadnezzar.  He was a powerful, brutal, and prideful king. One day he had an unsettling dream, and called upon all the wise men and astrologers to interpret it for him. When they couldn’t, he had them all killed. But Daniel was able to interpret his dream, through God of course, and when he did, Nebuchadnezzar promoted Daniel and “gave him many great gifts, and made him ruler over the whole province of Babylon and chief administrator of all the wise men in Babylon” (Daniel 2:48).  What a promotion! But even with all the respect and advancement Daniel received from Nebuchadnezzar, he still couldn’t have been an easy boss to work for.  He was so prideful that he had a huge image of gold (about 90 feet high by 9 feet wide) erected and commanded that everyone bow down to this image when certain music was played.  If they didn’t bow down, they were to be thrown into a burning fiery furnace! When I really stop and think about the type of person Daniel’s boss was, it makes it easier for me to appreciate the fact that my work situation or boss is nowhere near what Daniel had to endure, And I am encouraged by seeing what type of person Daniel must have been.  When Nebuchadnezzar became insane and lived like an animal in the wilderness for seven years, it is believed that Daniel may have helped care for him at times. Years later, when Daniel worked for King Darius, he again made such an impression with his excellent work ethic, that Darius wanted to promote him, setting him above all the other kingdoms (Daniel 6:3).  As we sometimes see in our own work environments, jealousy set in, and his co-workers conspired against him and made trouble for him by deviously getting the King to sign a decree that praying in the open was punishable by death, death by lions to be exact.  Of course Daniel continued to pray, as we obey God rather than man. When the king found out, his reaction is a testament to the love and admiration he had towards Daniel: he was devastated. He fought with all his might to have the law reversed, and when nothing could be done, he had to follow through with his own law. When I read this story, I was so touched by how Darius felt towards Daniel.  He obviously felt sorrow and remorse, as evidenced by his not being able to sleep or eat. Very early the next morning, Darius rushed over to the lion’s den and cried out to Daniel, asking if his God was able to save him. He was so filled with gladness that Daniel was still alive and immediately had him brought up, and had the guys who conspired against Daniel throw in the lion’s den.

What an excellent example Daniel was.  He was a dedicated, loyal, and reliable employee. His bosses, great kings, greatly cared for him and respected him. And Daniel also cared for his bosses, not wishing any harm to come to them; he was also tactful, yet honest with them. When he had to relay the bad news behind the meaning of Nebuchadnezzar’s dream, he said “My lord, if only the dream applied to those who hate you and its interpretation to your adversaries!  (Daniel 4:19). Even though his superiors may have done some pretty terrible things, Daniel still was the model employee. He served the Lord first and foremost, and would not compromise his beliefs, even if that meant death. But he still treated his superiors with respect and honor, going above and beyond putting in a day’s work. He worked as he was working for the Lord, and by this, he was able to endure working in some pretty unfavorable circumstances, yet excelling in his duties as he did so. That is the kind of employee I want to be.  By Daniel’s faith, he was an excellent witness for the Lord to his superiors and his co-workers.  Because of his exceptional work ethic, he was considered trustworthy and was respected, and as a result, was elevated and given many responsibilities.   The story of Daniel reminds me that no matter how difficult my work situation may be, the Lord will give me strength to endure, and when I work as I am working for the Lord, I will be blessed in many ways, primarily, by knowing I am working for my King, King Jesus.
Posted by Gabrielle Cruz at 9:25 AM 2 comments: